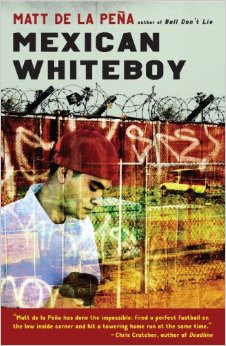 The masks that Danny are Uno wear are very different from each other. Danny is half white and half mexican and this makes him feel out of place when he is with his mexican family. Danny is quiet because he feels out of place in every world he sits in. When he is in his white neighbor hood he feels like the mexican kid and when he is a mexican neighborhood he feels too white. On page 188 he says “I came here because I feel like a fake mexican. And I don’t want to be fake I want to be real.” He is so desperate to be mexican but he doesn’t know how to so he stays quiet. Uno on the other hand is very confident and outgoing. He wears a very tough mask. He acts like he is manly and rough and nothing can touch him. This shows through when we look at things Uno does. He gets into fights, he has a record, and he disrespects his mother. This is a show of how he was socialized. He was socialized to be that way and that is all he has grown up seeing.

The main concepts of socialization I think in this book was race and economic class. Race is portrayed throughout this entire book. We see it from Danny’s white mother who has her rich boyfriend and perfect life to the families in National City. The people in National city are a perfect example of socialization through race. They are for the most part mexican and they all work low paying jobs and never have dreams of going furthur than that I think the perfect example is on page 210 when Sofia says “ What do I know about college? Nobody I knows ever been there. Nobody in my family that's for sure.” This shows that because of her race and what she has grown up with she doesn’t believe she can be anything more. Danny says on page 59 “ Then on the sly he peeks down at his collar shirt his vans. He looks at Raul and Lolo. T-shirt and jeans. Timberlands. He needs to get new clothes.” Socialization goes down even as deep as the clothes we wear. As for economic class we get a look at the lower class in this book. Everyone in Danny’s family is poor. Everyone in their neighborhood is poor. This means that they don’t really see any other way to live their lives. They don’t have influence saying that they could be something more so they accept that their lives and keep the cycle of socialization going. I think that Danny feels guilty in this book because he comes from a dominant race and a wealthier family. He feels bad because he looks at his friends and family and sees them struggling when he doesn’t have that problem. This book really shines light on how race and economic class can affect how a person thinks of themselves.

I think the book made me think a lot more about how much our race and class make us who we are. I’ve never had to be concerned as to whether or not I can go to college or if I will get a job because of my skin color. I have never thought about how the color of my skin aids me in every aspect of my life. Reading this book gave me insight into how life is for someone of a different skin color. They are okay with working low paying jobs and not going to college because that is all they know. I also saw how it was hard for them to get things like simple jobs. Uno could barely find a job because he was black. It also taught me a lot about what it’s like to be a part of a poor family. I’m part of the middle class and I have always had more than I needed. It was interesting to see how a poor neighborhood works because I have grown up in Durango where people are pretty well off and there isn’t a lot of poverty. Seeing how things worked in poor place made me have to think more about what I have and what I take for granite.

Reaction:
One comment that I disagreed with was that Sofia had to be tough and strong to fit in with her crowd. Though I felt that this held some truth to it I think kind of the opposite of that. There is a part in the beginning of the book where Danny says that Sofia looks different and that she looks more feminine than she did before. I think as she grew up she had to start become more of an idealistic beauty to fit in. She needed to wear makeup and skimpier clothes for the boys to be attracted to her. I believe that she was tough but the boys kind of pushed her aside when she would try and act strong. You can see this when Uno hits danny and she gets all up in his face and he just waves her off. He wasn’t thrown off by her aggression because she was just another pretty girl. She might have seemed tough but i think it was quite the opposite.

Connections:
Sofia didn’t believe that she could go to college and she gives us an insight into what it’s like to be from a lower class family. I can connect this to something in my family. We own a ranch out in San Diego that has been in the family for years. We have Mexicans that work for us and it is interesting to see how their lives remind me of this book. None of them went to college and they all work manual labor jobs. The daughters all had kids at the age a of 16 and haven’t done much else with their futures besides have more kids. I think that they in a way resemble Sofia because they haven’t had an influence to show them another way of life. The idea that if your parents don’t go to college or do something more with their life then you won’t either is a harmful one to be passed down. It makes people not reach their full potential when they have so much more to give.

Self- Evaluation:
I think that I did well with using evidence in the seminar. I feel that almost all the claims I made were backed up by the text or had some relevance to the idea of socialization. When you make a claim I think that its is very important to have facts behind your words or else they won’t mean anything. One piece of evidence that I felt particularly proud of was when we were talking about Danny and his socialized mask. I used the quote on page 188 where Danny is talking to Liberty and he says how he feels like a fake mexican and he doesn’t want to feel that way. I was proud of this because I think that it really showed the core of everything that Danny felt about of himself. One area that I could have improved in was asking deeper questions.  Even though I felt confident in my seminar skills I thought that there where more questions that I could have asked to take what we were talking about and go deeper with them. It is vital to seminar to take the question at hand and take it further and I don’t think that I showed through in that aspect.

Most Beautiful Line:
I think the most beautiful line in this book is” I came here because sometimes feel like a fake Mexican. And I don’t want to be fake. I want to be real. I love my Dads family. And I love the culture and the language and everything my grandma cooks and the way they live. I’ve always wished I was more like them. But since my Dad left it’s twice as bad.” I believe that this at its core is all that Danny wants. He wants to fit in so badly with his family. This was just so powerful to read because you could feel how badly Danny wanted to be a part of theirs lives and how desperately he wanted to be like his Dad. All Danny really wanted was to be like his Dad even though that wasn’t always the best thing. He still needed to belong to something and that is why I feel this quote sums up all that Danny feels. ​